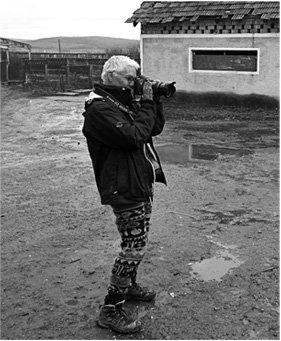 “The eye should learn to listen before it looks.”
Robert Frank

Roni Ben-Ari photographer, who focuses on presenting social themes. Her photographs effectively penetrate the
viewers mind and remain in their memory, just as she successfully did in reporting journalistic social issues, for which
she was awarded Ziv Journalism Award
The photographs presented here are classic examples of her dealing with social issues documenting those who are at
the society’s margin, those who we do not see, those who are faded, transparent or muted and occasionally looked at
as social mirage
Her documentary work obtains an artistic dimension due to her ability to pronounce details and neutralize others to
abstraction, thus changes the objects’ identity
Roni’s work is challenging the collaboration between the photographer and the photographed. Her camera caresses
the photographed and cares for them softly. The picture talking is at arm’s reach so much so that the term “object”
becomes offending in relating to her work
… “In viewing her photographs, it is unclear who the object is and what is the background. Is the photographed the one
who asked to be photographed or is it the photographer who asked them to be photographed? Who exposes himself to
whom, and who serve who
Authority relationship is fundamental and the ABC of photography, especially, when dealing with what is permitted and
not permitted. From which distance is it acceptable to take a picture. What does the distance suggest in regard to the
action itself? Photograph narrates “taking” as the verb suggest “taking a picture”. In Roni Ben-Ari’s photography, there
is no “taking” it is an act of giving
It dominate to the point that she hears the voices of her objects, feels their needs and touches their textures and so
brings them closer to the viewer”. Miki Kratsman, Curator

Solo exhibition, “From the Inner Margin” In the city hall of Sibiu, Romanian

The 5th Edition of the Jacob Riis for documentary Award

Association for women’s art and gender

The Union of Journalists in Israel

The Ramat-Gan Museum of Israeli Art

The Central Museum of Textiles in Lodz, Poland

Private collections, among others are: Yehudit Yovel Recanati, Ami Federmann

Solo exhibition – “Home is where the Hurt is”, Memory of Future gallery, Paris

“Traces of borders”, In between Two Cities”, The Museum of Arachnology, Jaffa, Israel

solo exhibition, “Till Their Voices Stop,” The Gallery of the Geographic Photography College, Tel Aviv, Israel